Some transforms can get quite large and complex, but often the entire thing comprises groups that perform some sub-transform. For instance, one input file I am, ah, transforming has a line which contains ‘Unknown user’ and other lines that contain ‘Unknown user for’. Both types of lines are the ones I want to capture, so I have a small group that filters, finds, replaces, etc. I’ve added a ‘note’ (“Add ‘for’ if it’s missing to enable column splitting”) but that’s can only be attached, at least, visually, to one transform.

What would be nice is to be able to just draw a box around a bunch of stuff to group them together for a note. And maybe allow the note text to be increased in size since it’ll be most useful at world view rather than zoomed in.

Just an empty box (with black borders) would be better than nothing, but ideally a background fill colour would be worth brownie points.

I agree that it would be useful to be able to be able to draw a box around a group of items in the Center pane. It is somewhere on the wishlist.

Until then you best bet is to visually separate items into clear groups.

How many input/transform/output items do you have in your .transform?

Not a lot in the general scheme of things: 25 in this one. 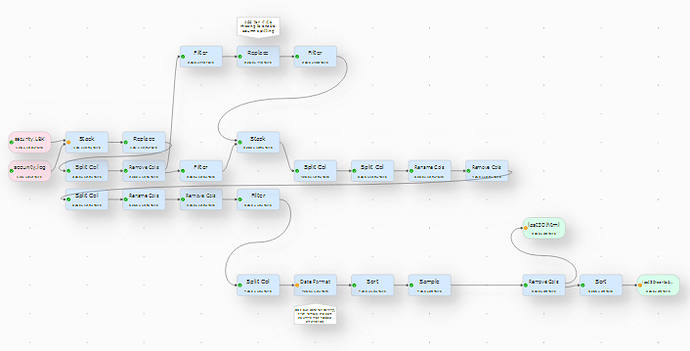 the25706×360 62.8 KB
I realise the diagramming is designed for placing the transform boxes and not free-form drawing, but figured it worth getting onto the wishlist sooner rather than later